Ross Taggart was something of a ubiquitous figure on the Canadian jazz scene at the time of his early death three years ago this month at 45. The Vancouver musician was a talented saxophonist and pianist, accomplished composer and true scholar of jazz history. Jill Townsend celebrates her personal connection with Taggart as well as his large contribution to the artistic life of the country with this big band tribute. Townsend’s Big Band and the Cellar Live label are also essential elements of jazz in Vancouver and Western Canada.

The band begins to paint a picture of the man they remember. “Don’t Call Before 10” keeps the groove both light and heavy, emotional without wearing its heart on its sleeve. The baritone solo by Chad Makela stokes the passion as well as being a paean to humor, a key quality in Taggart’s short life. A mellow ballad, “Light at the End of the Tunnel”, follows, adding another color to the palette of the composer and a big band passionate enough to realize this depth of emotion.

Trumpeter Brad Turner and guitarist Bill Coon add further delicate textures in their solos. Another part of the Taggart personality and sense of the past is revealed in the boppish strut emerging from the start of “T.V. Lunch”. The smart line is deftly handled by the brilliant section playing and each of the soloists that follow—Turner, tenor saxophonist Steve Kaldestad and drummer Dave Robbins—deftly combine instrumental prowess with the ability to tell a story. That story is about a man who made a difference and how his spirit is kept alive in the big band where his talent was nurtured.

“But love, as a tangible presence, is rarely as clearly felt as it is on this new CD, which glows almost from beginning to end. Dozens, if not hundreds, of threads of connection run through this album. For one, Taggart played tenor sax in trombonist Jill Townsend’s band for more than a decade; for another, the first release on saxophonist Cory Weeds’s prolific Cellar Live label was a Taggart quartet date.”  See more

“Taggart contributed his unparalleled piano and saxophone talents to a number of local jazz ensembles including the celebrated Jill Townsend Big Band. So, to pay tribute to their friend in music and life, Townsend and Co. took a carefully curated selection of works Taggart composed – most of them designed for a quartet – and rearranged them for a big band” – See more

“Former student and Cap U alumnus Cory Weeds—along with Cap U jazz instructors Bill Coon, Brad Turner and other members of the Jill Townsend Big Band—will pay homage to their friend in a concert releasing a new album in his memory”. – see more

TALES FROM THE SEA: 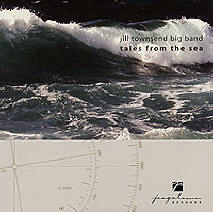 “From the place that brought us Rob McConnell and the Boss Brass Jazz Orchestra, we now have the Jill Townsend Big Band from Vancouver with their first CD, Tales from the Sea.”
Reviewed by: Edward Blanco , JazzReview.com  see full review

“The band is superb. The soloists are uniformly great and the entire production is excellent.”
Rob McConnell (trombonist, arranger/composer, leader of Rob McConnell and the Boss Brass and the Rob McConnell Tentet

“The team of Jill Townsend and Bill Coon supply charts that are rich and fresh rhythmically, melodically, and harmonically… ”
Ian McDougall (trombonist/composer/arranger)

. ..I must say I was impressed by the uniqueness and originality of this band, and proud to say that here in Vancouver, we do have this world-class jazz band directed by Jill Townsend….
Ed Farolan (Vancouver Review) see the full review

“It’s fantastic! I was impressed by all the abilities –playing, writing, sound, etc.”
Jiggs Whigham (tromboist)

“every soloist shone, but the real star was Townsend herself, whose detailed, intricate charts swung with impressively Ellingtonian suavity…”Alexander Varty – Georgia Straight

“Seeing the band …was an impressive sight. Hearing the group play was even better…(they) created an uplifting vibe.”
Chris Wong – Vancouver Courier

“The band led by composer, arranger Townsend, features some of this city’s finest players… Campbell Ryga starts early on, playing great soprano sax on the opener, The Gift, then providing stellar alto sax work on Old Folks.  Guitarist Bill Coon… is his usual sparkling self,”  see the full review

​”This is what makes reviewing such an adventure. Just when one thinks he may have heard it all, a new big band comes out of nowhere— a marvelous new Jazz ensemble whose artistry and resourcefulness can best be described as breathtaking. ..see the full review
Jack Bowers – http://www.allaboutjazz.com